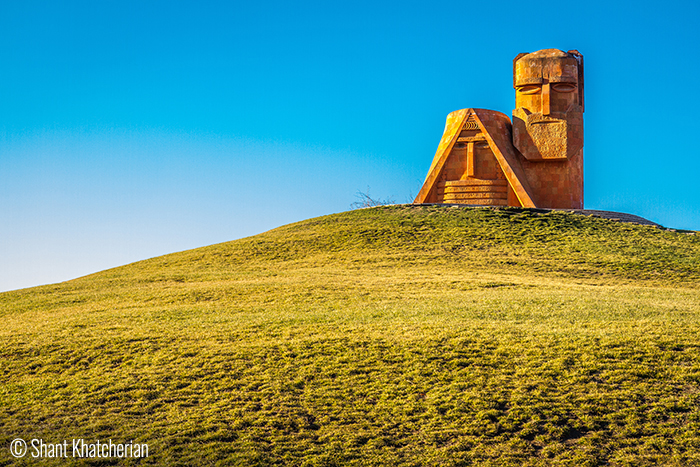 © Shant Khatcherian (Laval/Quebec. Canada). We Are Our Mountains – Nagorno Karabagh – A sculpture by Sargis Baghdasaryan. 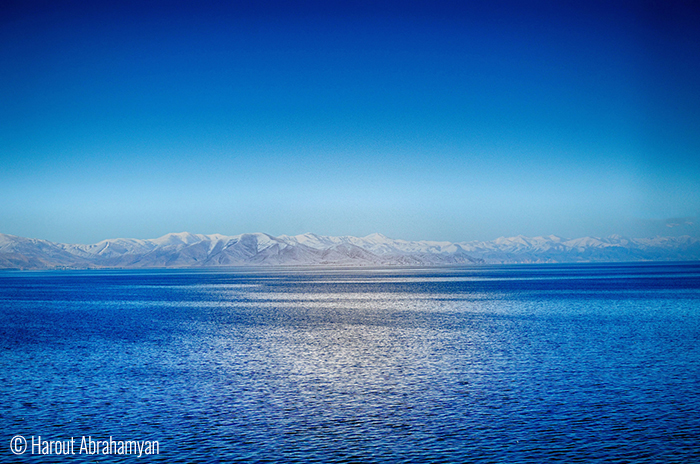 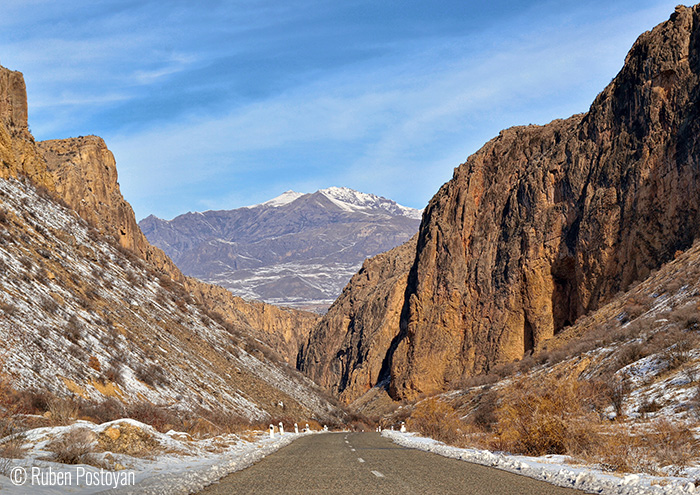 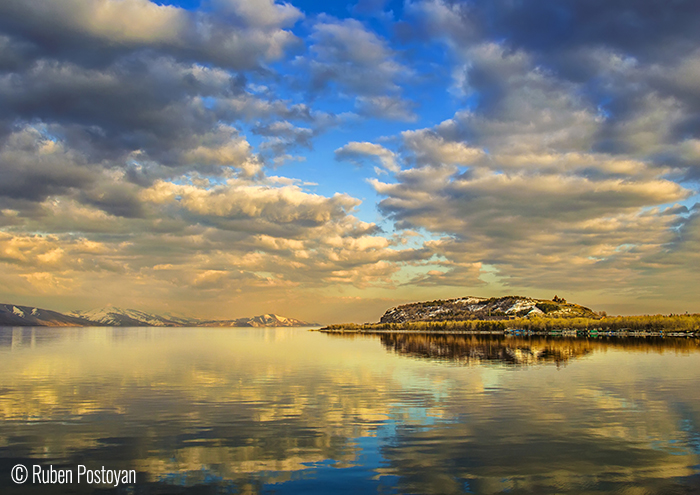 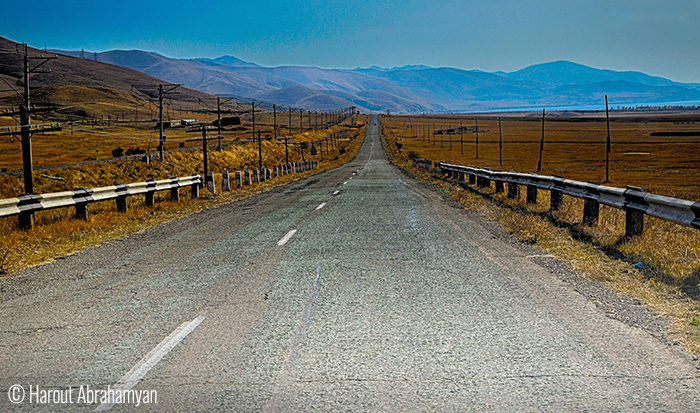 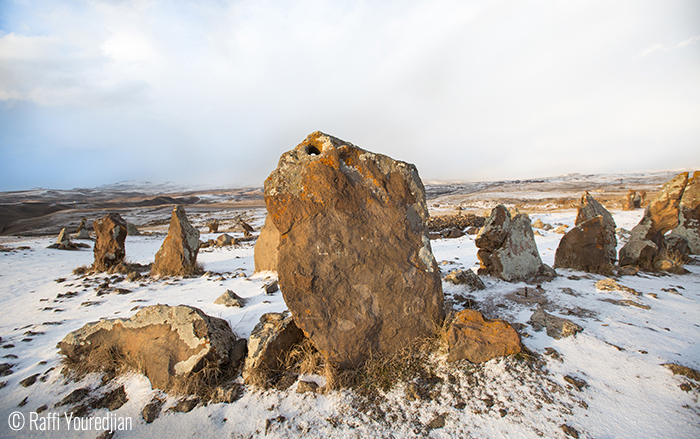 © Raffi Youredjian (London, UK). Frozen Karer- Zorats Karer of Karahunj are the ancient stones thought to be an observatory on the outskirts of Sisian. 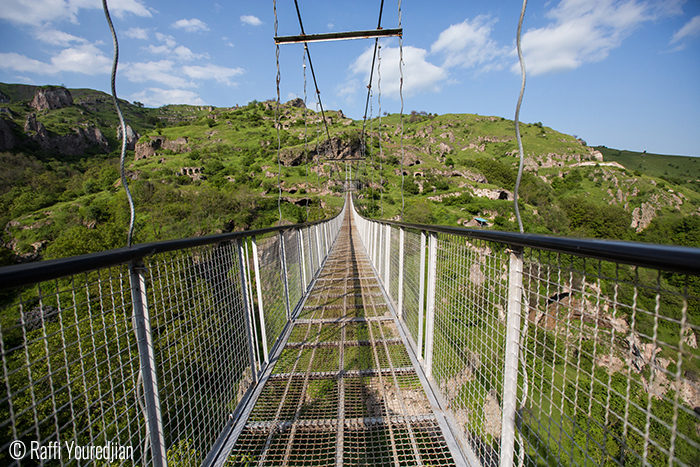 © Raffi Youredjian (London, UK). Bridge of Khndzoresk- Khndzoresk is known for its caves and rock formations. It is located in the South East of Armenia just past Goris on the way to Karabagh. 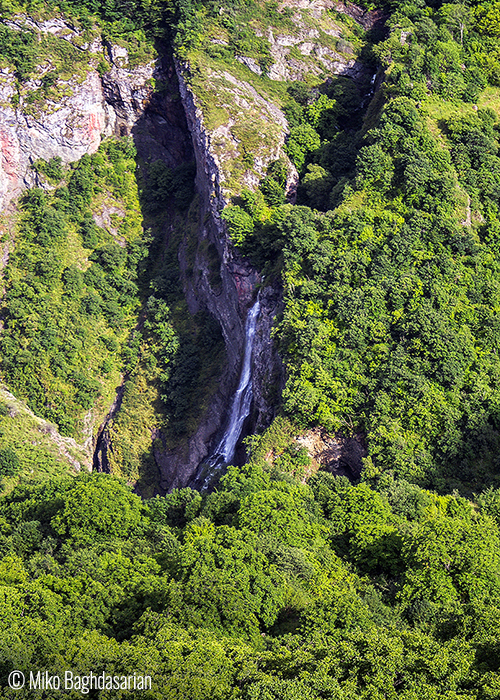 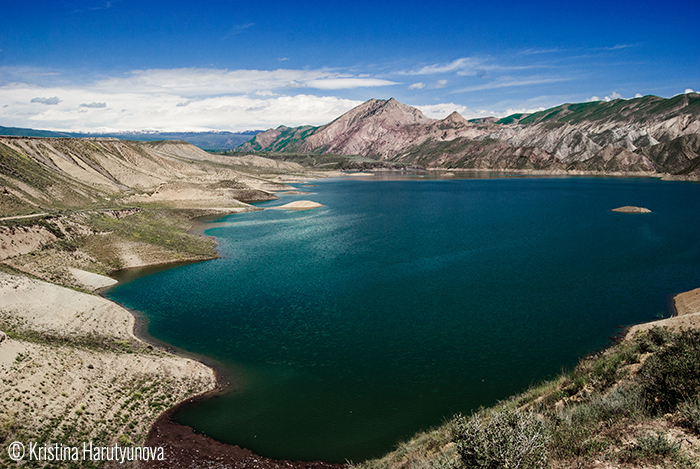 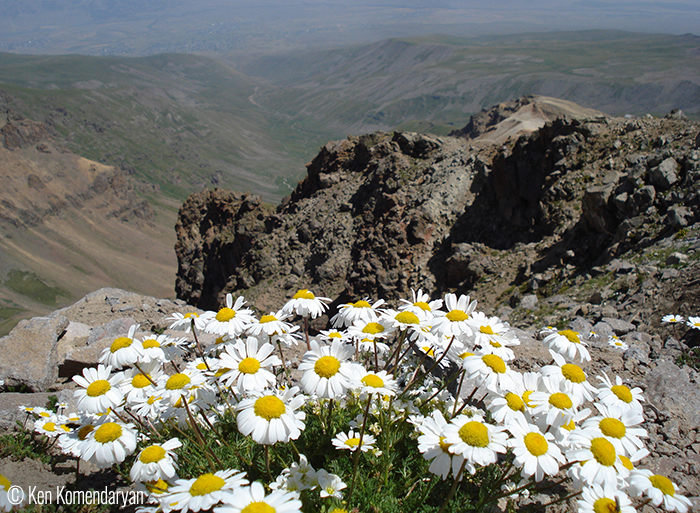 © Ken Komendaryan (Yerevan, Armenia). The flowers and the stones – Mount Aragats
The photo is taken at the Southern peak of the mount at the elevation of about 3900 m. 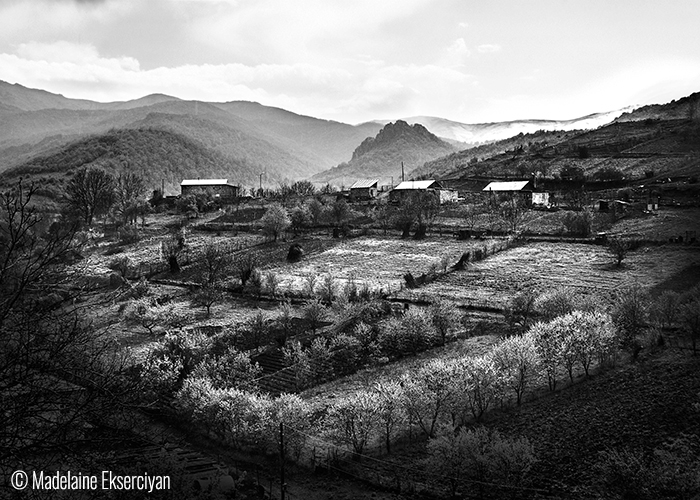 © Madelaine Ekserciyan (Buenos Aires, Argentina). Karintag – Karintag – It was raing, and after a very huge and lovely lunch made by the Kugabed’s family, the view from the window became magical. 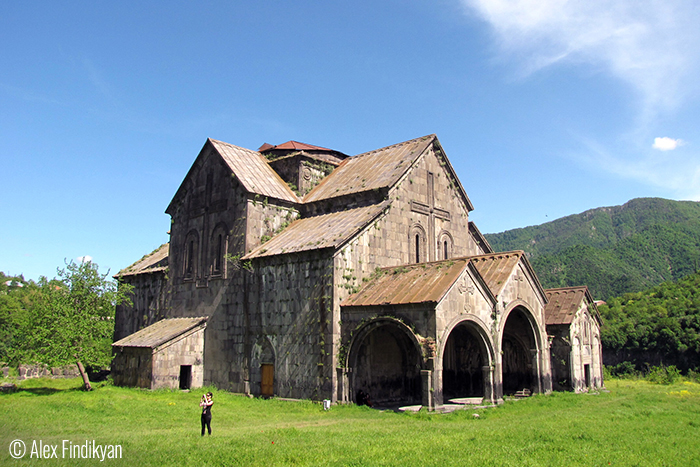 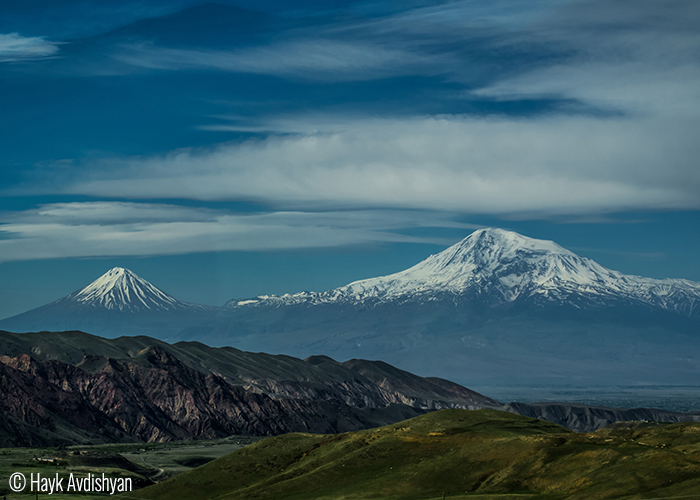 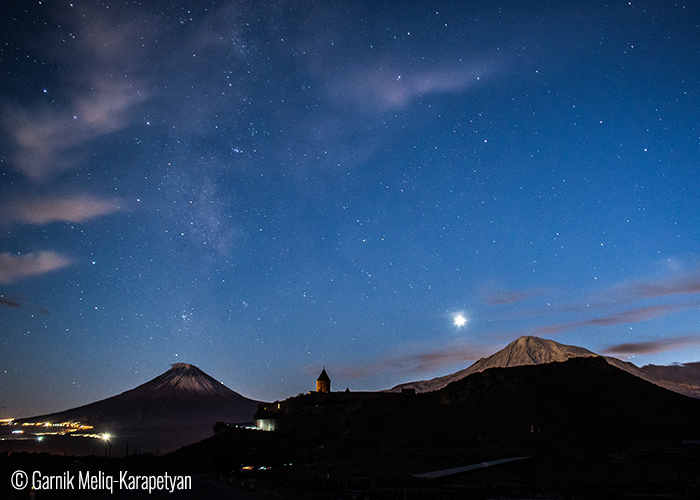 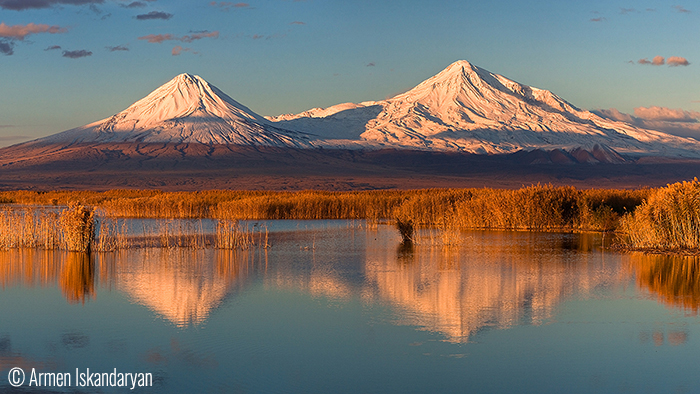 © Armen Iskandaryan (Yerevan, Armenia). Fiery Start of a Day – Mountains of Ararat – Famous in the Bible as the final resting-place of Noah’s Ark, Mount Ararat has been wreathed in legends for millennia. Since ancient times, Ararat has been revered by the Armenians as their spiritual home and as the home of the gods of the Armenian pantheon. Today, it is the national symbol of Armenia, being featured in the center of the Coat of Arms of Armenia. Located in Turkey, photographed from Yeraskh, Ararat Province, Republic of Armenia. 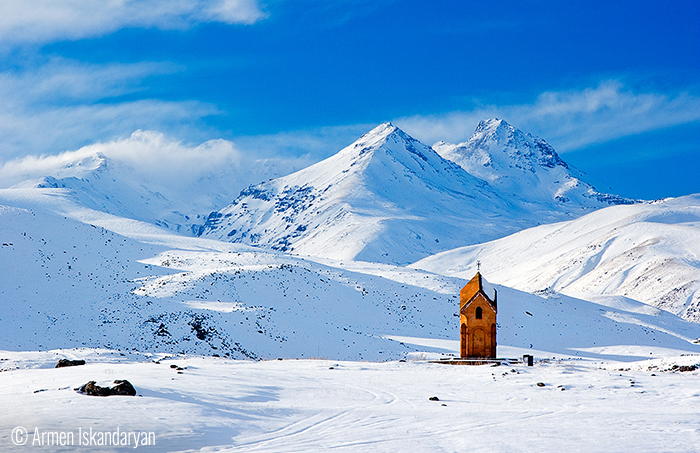 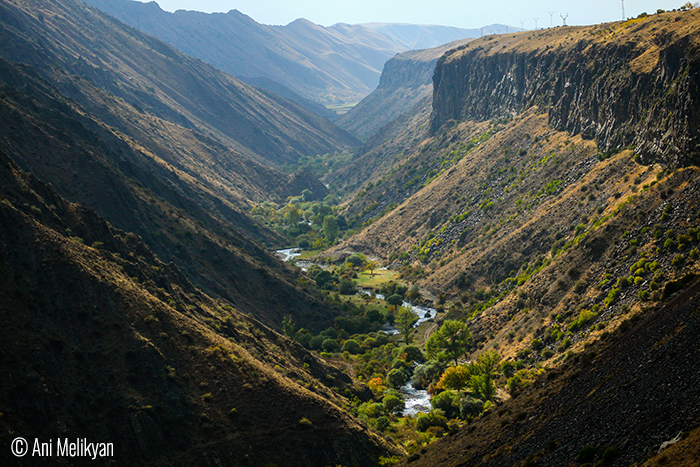 © Ani Melikyan (Kiev, Ukraine). The sign – Somewhere between Armenian-Georgian border and Gyumri- We were lucky to watch this beautiful scene when returning home from Georgia. 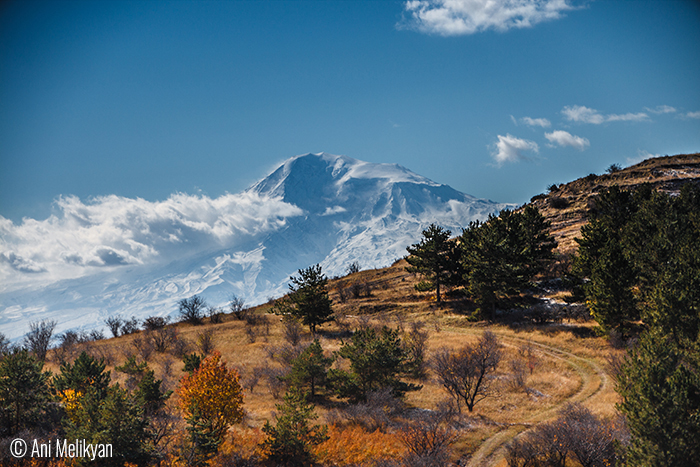 © Ani Melikyan (Kiev, Ukraine). When autumn and winter meet /Near Voghjaberd village/Ararat is the holy mountain of all Armenians. And though it is situated on Turkish land, every Armenian dreams of Ararat to be back to its people. 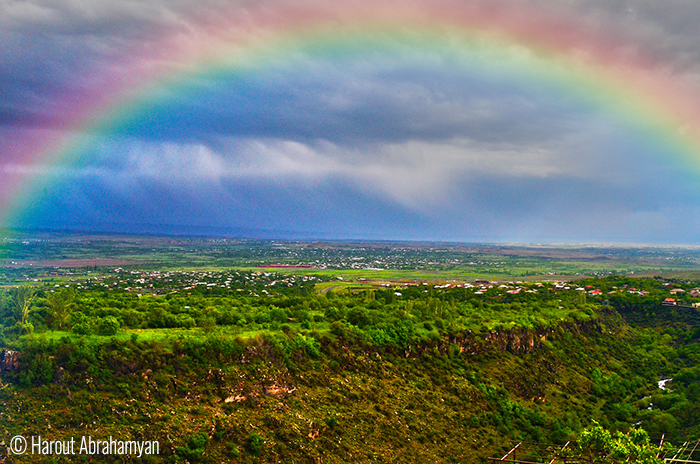 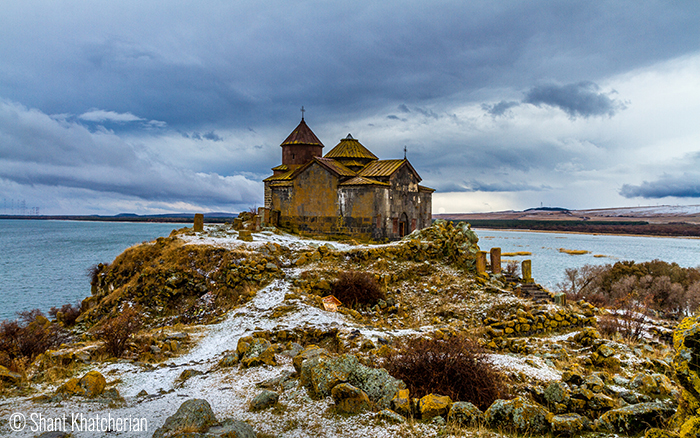 © Shant Khatcherian (Laval/Quebec. Canada). Hayravank – Sevan Lake – Located north-east of a village with its name, this 9th – 12th century monastery consist of a church, chapel and a narthex.