© Armen Iskandaryan (Yerevan, Armenia). Haghartsin Monastery – Haghartsin (Haghardzin) is a 13th-century monastery located near the town of Dilijan in the Tavush Province of Armenia. It was built between the 10th and 14th centuries (in the 12th under Khachatur of Taron); much of it under the patronage of the Bagratuni Dynasty. St. Astvatsatsin Church in Haghardzin (1281) is the largest building and the dominant artistic feature. St. Astvatsatsin Church gavit is severely damaged. St. Gregory Church is the oldest large structure of the complex. The 12th-century gavit abutting St. Grigor Church is of the most common type of plan. The small St. Stepanos Church dates back to 1244.

© Armen Iskandaryan (Yerevan, Armenia). Lake Sevan and Church Airavank – Airavank Monastery is a 9th-12th century Armenian monastery located just northeast of the village of Hairavank along the southwest shore of Lake Seven in the Gegharkunik Provence of Armenia. The monastic complex consists of a church, chapel and gavit. Surrounding the monastery are numerous khachkars and gravestones that are part of a small cemetery.

© Armen Iskandaryan (Yerevan, Armenia). Zvartnots Temple – Zvartnots Cathedral (meaning “celestial angels”) is a 7th-century centrally planned aisled tetraconch type Armenian cathedral built by the order of Catholicos Nerses the Builder from 643-652. Now in ruins, it is located at the edge of the city of Vagharshapat (Etchmiadzin) in Armavir Province of Armenia. 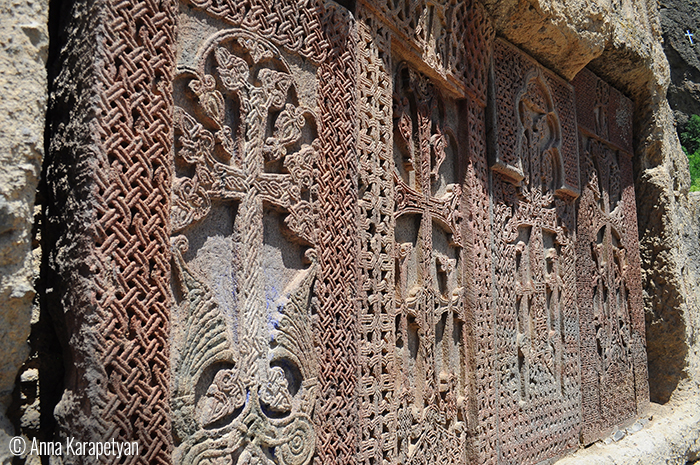 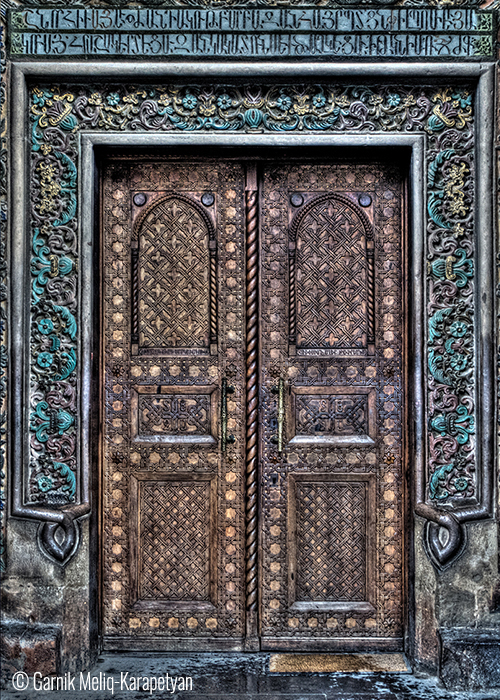 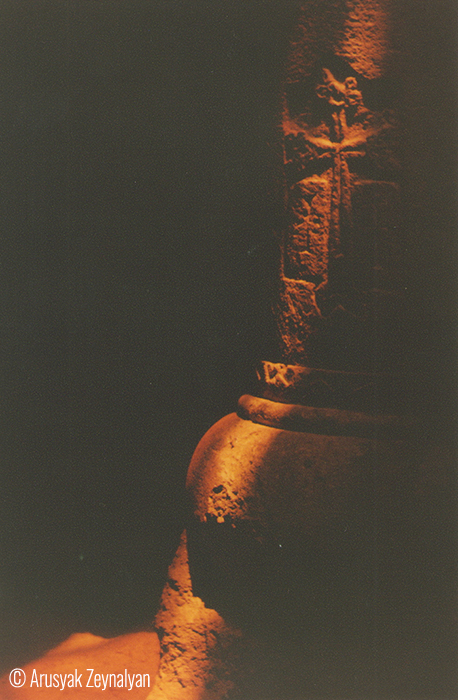 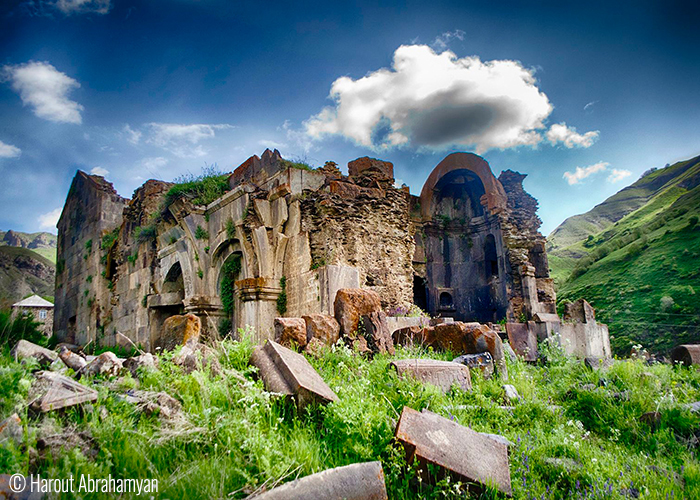 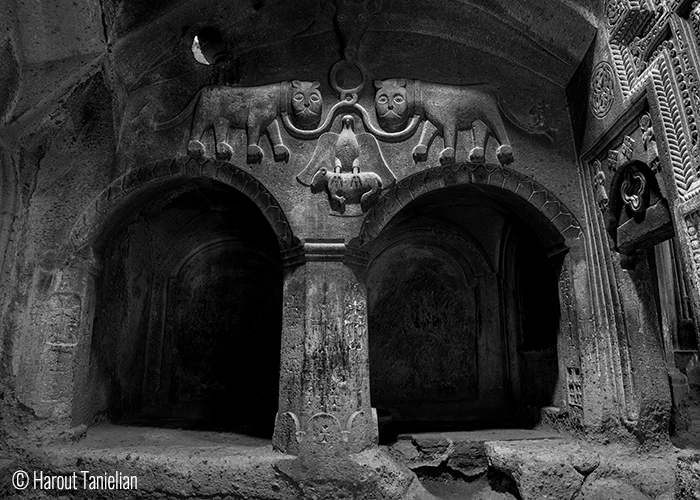 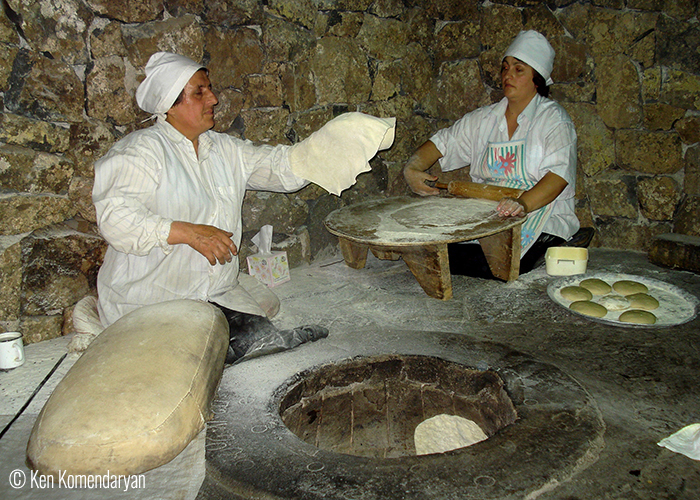 © Ken Komendaryan (Yerevan, Armenia). The library of the National Association for Armenian Studies and Research – Belmont, Massachusetts. The NAASR was established in March 1955 at a special meeting at Harvard University Lavash baking – the village of Garni Lavash is the traditional Armenian bread inscribed by UNESCO in 2014 as “a traditional thin bread that forms an integral part of Armenian cuisine. Its preparation is typically undertaken by a small group of women, and requires great effort, coordination, experience and special skills.”. 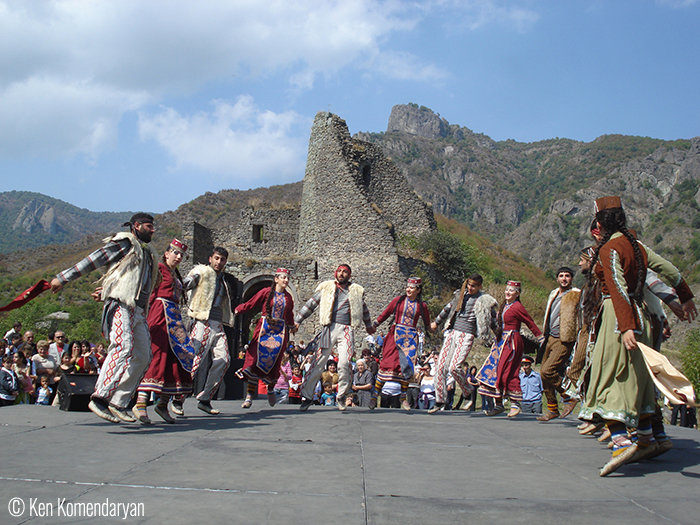 © Ken Komendaryan (Yerevan, Armenia). Armenian dance – Akhtala Monastery. A folk ensemble performs a dance during the annual Khorovats (Armenian barbeque) Fest at the Akhtala monastery. The complex is built in the 10th century by the Kurikids of the Bagratuni dinasty. The tower in the back is a part of Akhtala defensive fortifications, the 13th century. Also the complex is known as one of the spirituals centers and a place next to the copper mines. 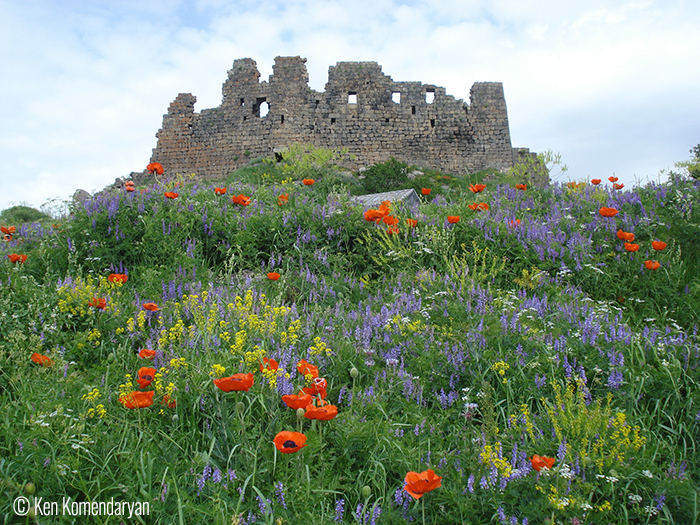 © Ken Komendaryan (Yerevan, Armenia).The ruins of Amberd and the poppies in the month of May – Amberd Fortress. The remains of the 7-13th centuries fortress are located at the slopes of the Mount Aragats at the elevation of 2300m. Due to the high altitude and impregnable position, the fortress was named Amberd – The Fortress in Clouds. Besides the citadel it houses a church and baths. 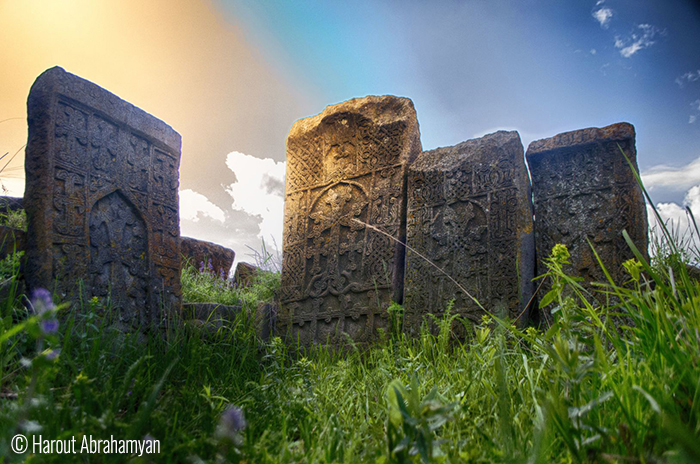 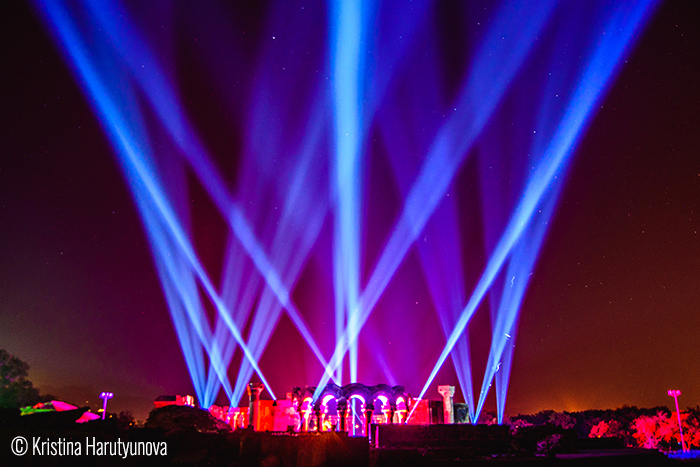 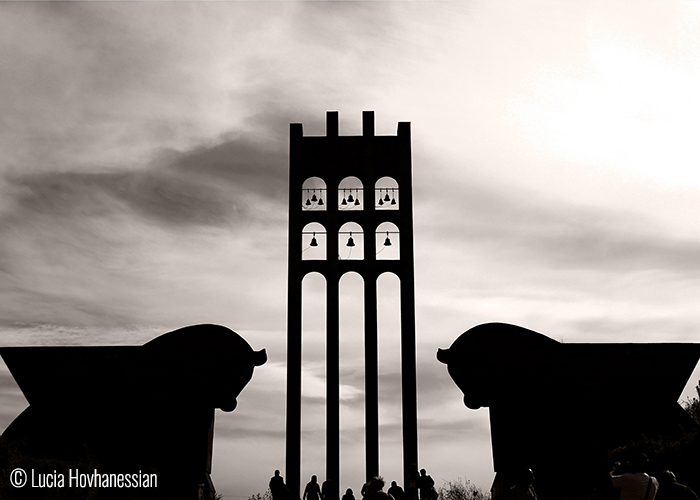 © Lucia Hovhanessian (Yerevan, Armenia). To our Heroes – Araks, Armavir Province – Memorial to the Battle of Sardarapat. 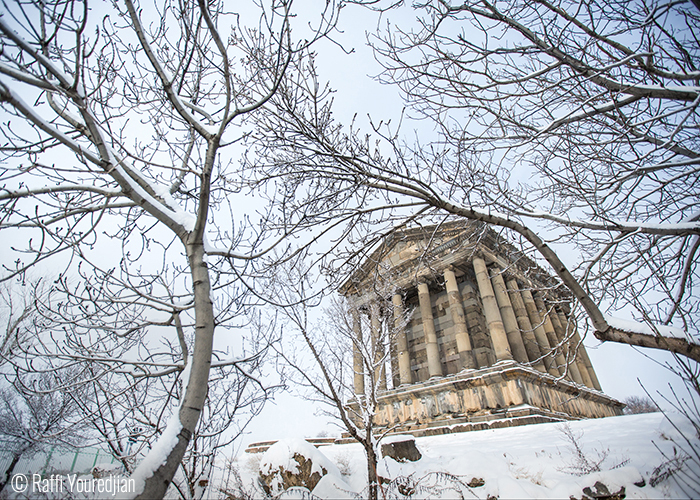 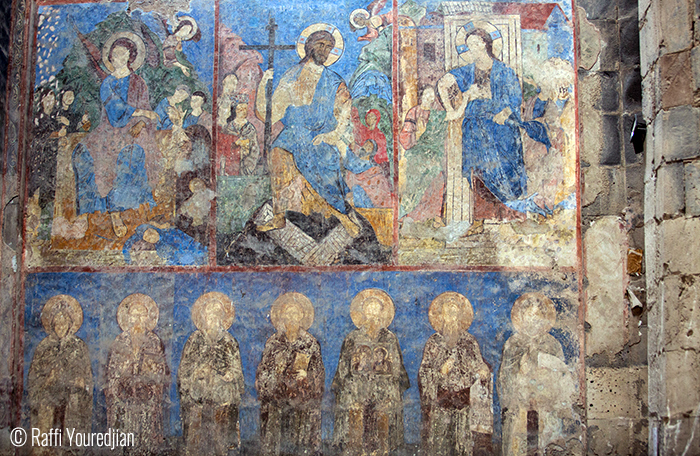 © Raffi Youredjian (London, UK). Winter in Garni – Garni Temple. Paintings of Akhtala- Akhtala Monastery- The monastery of Akhtala houses some of the most beautifully preserved frescoes in Armenia. 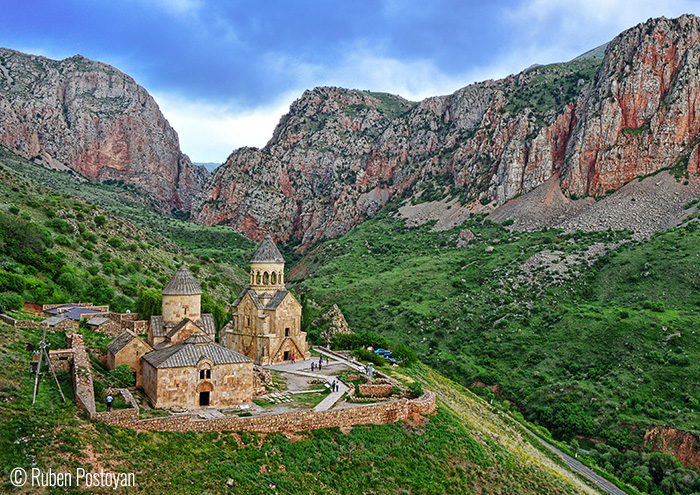 © Ruben Postoyan (Yerevan, Armenia). Noravank-Noravank Monastery-Vayotc Dzor Province of Armenia. Noravank is a 13th century monastery, located in a narrow gorge made by the Darichay river, nearby the city of Yeghegnadzor. The monastery is best known for its two-storey S. Astvatsatsin church. 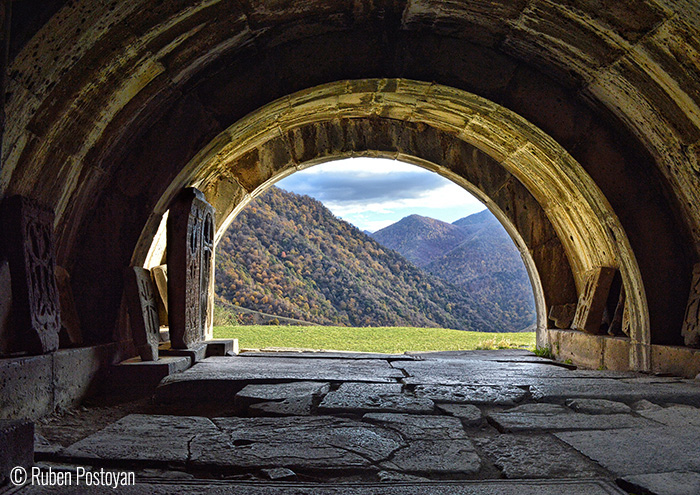 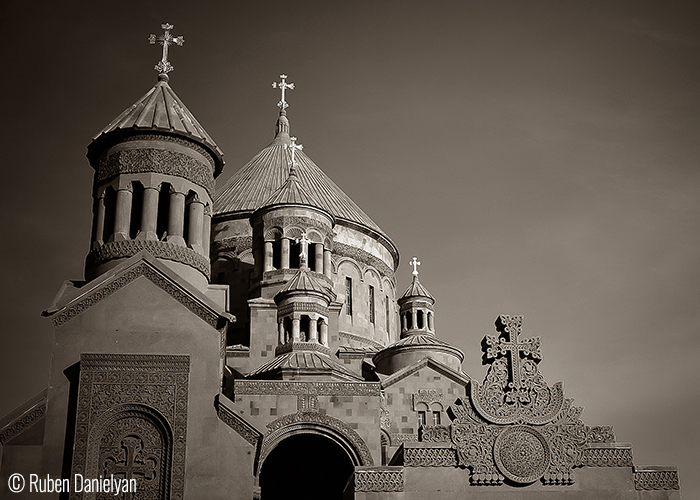 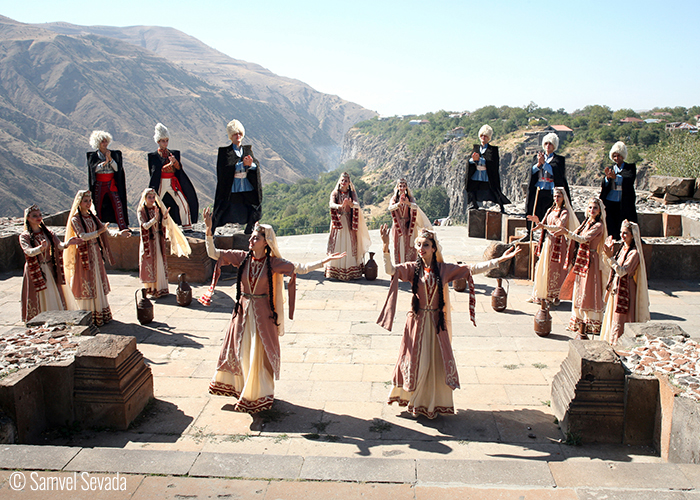